It has been both a quiet and frantic week around my house. With the dark arriving early and staying later in the mornings and school and hockey starting, we are all adjusting to new routines and entering seasonal slow-down. Nights are quieter when we are actually at home (though possibly a little more frenzy would be helpful to get things done). The small squeaky kid is now practicing with a league hockey team (as is the tall kid) as well as her Initiation Program group, so that has meant 3 days of hockey every week for us. Add in caring for the animals at night, practicing piano and homework, and we have a new busy-ness to get used to.

I had a few people ask about the recipe for the pepper jelly, so here is my version. I have lots of jalapenos turning red in the garden, so I thought I’d give this a try this year. My grandma used to make this jelly and I always loved it. I used this recipe, but made a few of my own adjustments. I didn’t use as much pepper as the original recipe called for – I wanted mine to be more jelly-like, the original called for so much pepper that it would have been more of a jam. You can judge the heat of the jalapenos and use the amount that suits your level of heat. Last year I would have used all 6 peppers that are called for in the recipe – this year I used 3 because they are much hotter. You can also use green jalapenos, I just used red to keep everything pretty and red.

The resulting jelly is really nice on crackers with some cream cheese or brie – we’ve been enjoying it at work this week. I am also looking forward to trying it on a grilled cheese made with aged cheddar and as a stir fry sauce with veggies and chicken or pork. 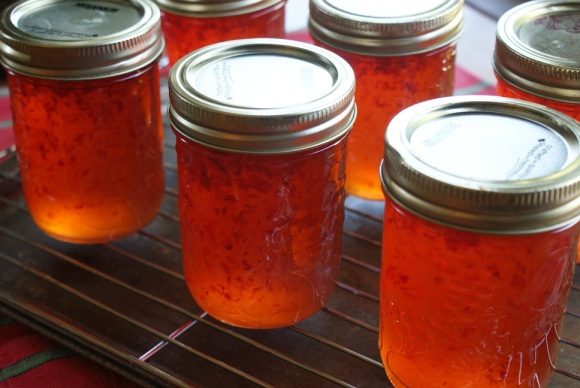 Wash and sterilize your jars and lids. I do mine in the dishwasher on the extra heat setting and don’t start the jelly making process until it has hit the drying stage – that way I know the jars and lids will be hot when I need them.

Have a canning pot ready at a boil to process the jars after they are filled. The water should be deep enough to cover the jars by at least an inch. You can use a canning rack or just a towel on the bottom of the pot to keep the jars from rattling.

Throw the seeded red peppers and jalapenos into a food processor or finely mince by hand. Use gloves to seed the jalapenos so you don’t get oil on your hands or it will burn. If you are using the food processor, open a window – you’ll thank me later. Breathing in the oil hurts, too.

I drain off the extra juice from the food processor before I put the peppers into to sauce pan. The extra juice could inhibit the gelling process. Put the minced pepper in a sauce pot and add vinegar and butter. Stir in sugar and bring to full rolling boil, stirring constantly. I let it boil for a couple of minutes.

Stir in the pectin. Return to full rolling boil and boil exactly 1 min., stirring constantly. Remove from heat. Skim off any foam with metal spoon. This part is kind of tricky. If it still looks runny at this stage, let it boil a titch longer until it starts to thicken. You don’t want it completely thickened at this point though – it really starts to gel as it cools after processing.

Ladle immediately into the sterilized jars, filling to within 1/4 inch of the tops. Wipe the jar rims and threads and add the lids, screw bands on finger tight but not over tight. Place jars in canner (use tongs) and boil for 10 min. Remove the jars and place upright on towel or rack to cool completely. You should be able to hear the lids pinging as they seal. After jars cool, check seals by pressing middles of lids with finger. If any lids don’t seal, you can either refrigerate that jar or open, re-seal and reprocess it for 10 minutes.

And this is for my husband – do NOT be tempted to jiggle the jars to see if they are setting. They need to sit still in order to gel. Leave them alone for at least 24 hours. If they don’t set up, there are instructions here to redo the recipe – or you can use it as a glaze on meats, vegetables and stirfry.