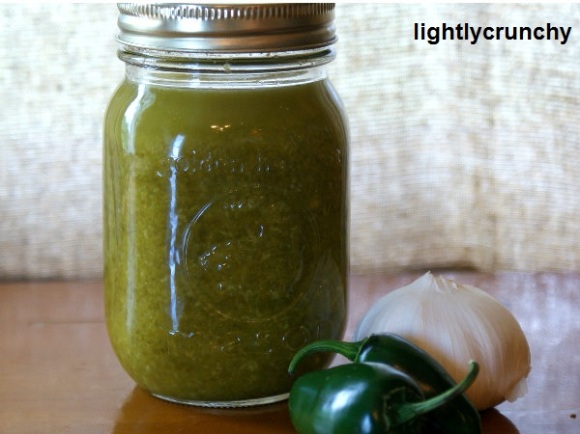 We planted peppers in the same style that we plant tomatos. Go big or stay home. There are two rows of pepper plants in the garden, and about half of the plants are jalapenos. They are just now starting to turn red, so I will probably be making this sauce again with the red jalapenos, but since there is a 2 week lead time for the fermentation process, I will post what I have so far. Our peppers are a little hotter this year than last year, but I like the bite of this sauce. It hits hard up front, but doesn’t leave a huge burn and tastes quite good. Next time I might also throw in a couple of onion halves on top to help keep the peppers in the brine and add a little extra something to the flavour.

The process is really simple; it requires 2 weeks to ferment and then you can make it into a sauce. I followed the recipe found here, and the only change was the kind and colour of pepper that I used. I used what I had on hand. Next year I would like to try growing some cayennes too and will make the sauce again with the cayennes.

You’ll need a pint jar or two, depending on how much you’d like to make – I filled 2 jars and it gave me just over a whole pint jar of sauce once it was processed.

Wash pepper and cut off stem end. Stuff peppers and garlic in the jars as tightly as possible. Add 2 1/2 teaspoon of sea salt per jar, fill up remaining space with water and screw on lids. Give it a shake and place it someplace cool and dark for 2 weeks. Once the two weeks are up, waz it up (my own technical term) in blender or food processor. It should keep well in the fridge for up to 1 year.

Leave the lid on for the two weeks – don’t take it off, you want the fermentation process to take place. You can keep an eye on it though – if a moldy looking scum seems to form on top, skim it off and carry on. I didn’t have any scum, but when I did open it after two weeks it fizzed like champagne, which is normal. Depending on your blending method, this will be a slightly pulpy sauce.