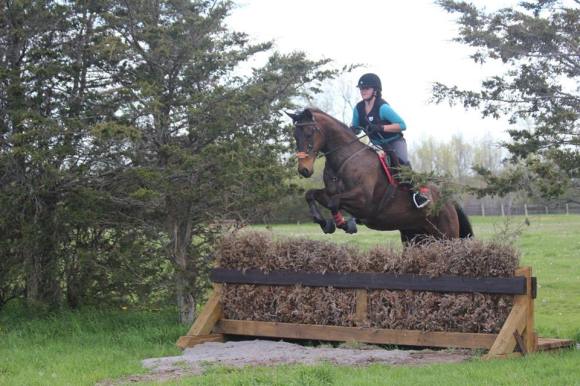 It has been a long time since I’ve written and I’m not sure if anyone will still be around to read this, but I am going to try to catch any stragglers up on what has been happening.

The tall hormonal kid and the small squeaky kid have both stopped growing and are taller than me. I no longer feel like I have all the power. And their ability to argue against everything that they are asked to do continues to improve in creativity. It doesn’t get them anywhere, but it is interesting to hear.

The tall kid has discovered rep hockey and rugby, so we are on the road a lot. This year she made Team Ontario for rugby and won the provincial championships, which led to her being one of 60 girls chosen from across Canada for the selection camps for Under 18 Team Canada. Now the 15 year-old has an eating plan and a training plan that will be monitored as part of the selection process. That is interesting. Have you ever seen a teenager give up junk food willingly? This coming weekend she will be playing with the Eastern Ontario team at a tournament in NYC. It has given her many opportunities to travel and meet new people and we are all having a blast. Last summer we drove to Nova Scotia to watch one of her tournaments. The hockey travel has mostly taken over now (last night we had our first drive through a winter storm to a hockey game) but there is still rugby filling in the cracks.

The small(er) squeaky kid has a new horse and continues to take lessons and pony club and enter into occasional shows. She started playing rugby too this year. Her big sister was excited until I nixed the idea of using her for tackling practice.

The dad has sold his old business and bought a new one. It’s keeping him busier than he anticipated, which is excellent any way you look at it. He also has a few staff now and therefore the freedom to take time when he needs to drive the kids to their various sports. Mercifully he hasn’t attempted to grow a mustache this year for Movember.

And I am now a stay at home mom. The leave from work became permanent because of changing health due to MS. It took a while to adjust and cope with the change in circumstances and health, but I think I am as close to being back to normal as possible. I took lessons and had hand controls installed in my car, so I’ve gained my independence back again. I was also referred to a doctor who helped with pain control, set up occupational therapy and physical therapy and has made suggestions that led to a lot of improvements. I have my independence back and am even going to the gym three times a week and using a personal trainer. Nothing can stop me now.

I stopped writing because I was no longer doing a lot of the things that I wrote about, but I think that we occasionally manage to do something interesting that will make it in this space. Hopefully it will also be entertaining.

what we did on our summer vacation

It’s been quiet here lately, I know. I’ve been spending time resting and waiting for the latest MS exacerbation to ease up. So far I am still waiting, but hopefully not for long.

In the meantime, a lot has been happening. We’ve had visits with friends and family and hosted another pig roast to get everyone together at once. The girls were busy with their respective sports; the squeaky kid has been in several riding competitions and the tall kid spent her summer taking various hockey conditioning sessions. The hockey training paid off – the tall kid is now on the local girls rep hockey team and headed off to an exhibition tournament this weekend. The squeaky kid has gained a lot of confidence in her riding and is also off to another competition this weekend.

We gave up on the garden this summer. I’d like to try again next summer with something a little closer to the house so that I can get to it myself. Our normal garden is too far away and the ground is uneven, making it difficult for me to get back and forth. And with the girls and the dad busy all summer, the few plants that we started out with were quickly forgotten. At one point, the teenage boy that we had doing some yard clean-up for us said that he found some zucchini growing wild out in the weeds along the edge of the field. We were almost too embarrassed to say that they weren’t wild. We did manage to harvest a few zucchini, cucumbers and tomatoes, but even those were few and far between due to the summer that almost wasn’t. We had a lot of wet weather and not as much sun and heat as we needed to grow much of anything.

Now that the girls are both back in school and summer seems to have come to an abrupt halt with the start of an early cold spell, things are getting back into their old routine. I might even show up here every now and then. I’m posting a video that someone kindly made for us of the squeaky kid at last weekend’s hunter-jumper show at the fair, since this is a good spot to showcase family achievements for friends and family to see.

Monday at the horse show…

On Monday, the small squeaky kid competed in a day-long horse show. She competed in a walk trot event and cross-country, coming in second in both and placing second overall in her class. It was a great day for a hard working little girl and her pony Clifford (show name: Devil in Disguise).

The small kid wrote this about her competition day:

Clifford refused a jump and I fell off.
It was hot and I got sunburned.
I have been practicing since late February.
Grooming him took a long time.
A friend came over to help prepare for the show. 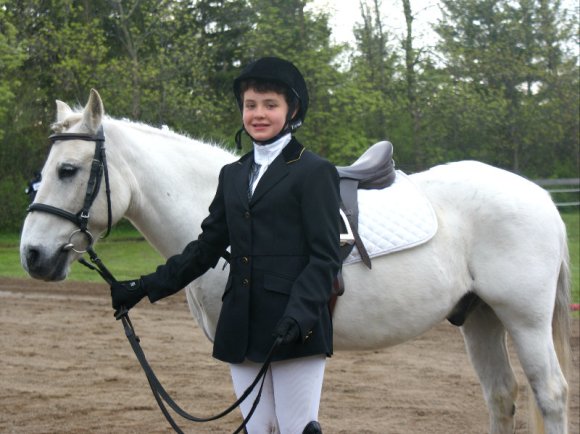 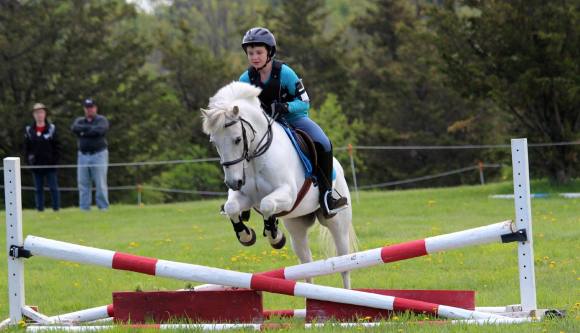