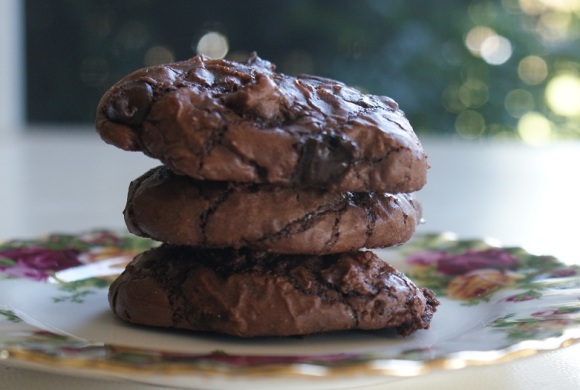 Last night the tall hormonal kid decided that she needed something to give to the boyfriend for Valentine’s Day. Our family operates like that. If you need something, wait until the last possible moment to announce it. At least we had been warned that there is a boyfriend. The dad is still working on the shock of that.

These cookies are an easy shortcut and make a good impression when the girls have friends over for weekend sleepovers. They look and taste complicated, but they are simple and quick to make – even the tall kid can manage them. She did tell me that I should write the recipe down so that it’s easier to find next time. Next time might even have a little forewarning.

Preheat oven to 350 F. Lightly grease a baking sheet (or use a silpat on the baking sheet).

Combine brownie mix, flour,and chocolate chips in a bowl. Add in the oil, water and eggs (lightly beaten) and mix together. Drop by spoonfuls of dough 2 inches apart onto prepared baking sheet. I like to roll them into balls and flatten them slightly with a fork. The dough is sticky, so if you are rolling them into balls, you will have to stop and moisten your hands with water occasionally.

Bake in preheated oven until cookies are just set, about 9-10 minutes. Let cool on baking sheets for a few minutes before removing to a wire rack to cool completely.

The dad entered a chili contest at our town’s Winter Chill Festival this weekend and came home with just a small container of leftovers for us to share. His two batches of chili (one super-spicy and one mild) were among the most popular of the 15 business entries, which explained the lack of leftovers. The winner still has not been announced, but he is hoping to place somewhere close to the top. He wants bragging rights.

Because there wasn’t enough to make a meal out of, we settled for our new favourite chili dip. We’ve made it several times during the holidays and it has been devoured quickly each time. It fits my criteria for party recipes – fast, few ingredients and easy.

Heat oven to 350F. Spread the softened cream cheese evenly on the bottom of a small casserole dish, 9″x9″ cake plate or a deep pie plate. Layer the chili on top of the cream cheese and top with the grated cheddar. Bake for 15-20 minutes until the cheese is melted. Serve with tortilla chips.

This is an easy dip to take to a workplace potluck as well and can be easily heated in a microwave for 5 minutes instead of in the oven. It can be made spicy or mild, depending on the chili that you use and or whether or not you use a spicy cheddar cheese for the topping.

October is over and we are just beginning to get to the quiet time of year around here. At least we are looking forward to it starting. As of yet, we are still busy with the storage business, lawns and the garden, but that should end very soon.

I’m also hoping that the new cold temperatures kill off the cold bug that has been travelling through the family. The small squeaky kid has turned into Typhoid Mary ever since school started. The rest of us have been doing our best to pass the same cold back and forth for the past five or six weeks. I’m pretty tired of blowing my nose.

I am again using this monthly summary to revisit the month and show us that we accomplished (or didn’t, occasionally). 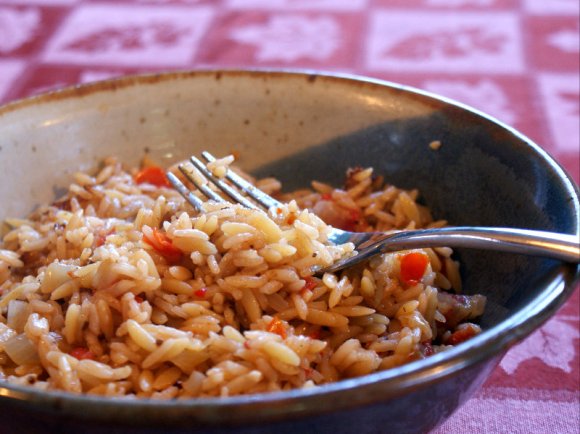 Because of our extended Indian summer this year (is that still an allowable term to use?) we had an great growing season and we were able to eat fresh vegetables from the garden all month.

We still need to improve on the eating out situation. The back and forth of hockey and the weird game and practice schedules have made us fall back on take-out or a quick dinner at the local mom and pop restaurant more than once. There also seems to be a fair amount of arena fries and poutine being consumed. We’re working on it.

I did manage to write about one new favourite in our house – an easy tomato rice pilaf. We’ve made it several times now, each time increasing the amount of tomatoes and always getting the same good results.

I spent an afternoon making some meals ahead of time to help us with the eating out situation. We cooked and cut up the meat of a large chicken and the did the same with the leftover thanksgiving turkey to be used in future meals. We’ve also continued to fill the freezer with the last of the garden zucchini and chard.

Our biggest accomplishment this month has been the massive cleanout of our cold storage room. It hadn’t been cleaned out for several years and when we moved here last winter we continued to ignore it. However, with a few hours work, some sweeping and mopping, we now have a room that is ready for the potatoes and onions and next year’s preserves. At least that is the plan.

The dad has ordered thirty chickens from a friend, some of which are to be shared with friends and neighbours, but the rest are going in our freezer. We have only received a few at this point, but it was enough to get us to clean out the freezers and make room for the rest. Another big job done. 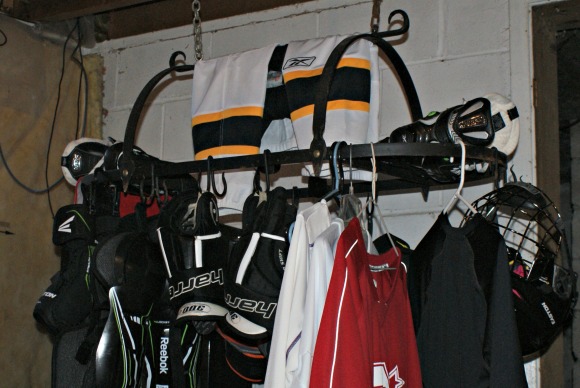 As usual, the fix it, use it up cycle continues. The dad has rewired three lamps for me this month (nobody has been electrocuted to date). We had been wanting a hockey equipment tree for the tall hormonal (smelly) kid to use to air out her equipment between games, until I came up with the (brilliant) idea of hanging a pot rack for her to use. The pot rack has followed us for the last two moves, but we haven’t had the space for it in the last two kitchens. I haven’t been able to part with it, and now I am happy that I didn’t. The dad hung it in an unused corner of the basement and the hooks hold the equipment and everything else can be hung up by a hanger.

There is nothing new to report here unless I count using the time-of-use hydro guidelines more effectively. I have been running the dishwasher and washing machine after 9 p.m. or on the weekends. The laundry is hung, with the exception of sheets and towels, which I don’t have the space to hang in our basement. Those continue to go into the dryer. 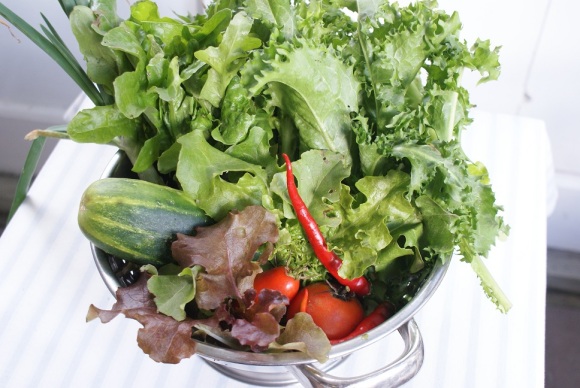 The garden was finally hit by frost at the end of the month, but we were harvesting a lot from it until then. I was able to cut lettuce and chard right up to the end of the month, and even found a few cucumbers amongst the vines. The green peppers and hot peppers kept going right up until the frost as well. I gave up on the tomatoes somewhere around the halfway mark in the month. I just can’t freeze any more tomato sauce.

We’ve pulled the onions and let them dry but have yet to finish digging up the potatoes. The carrots can remain in the ground for a while longer – a little snow won’t hurt them. And apparently the Brussels sprouts should just be getting ready to cut down now. We did manage to grow a few good stalks of them, and have patiently waited until after the frost to try them, as we were told that they are better after a frost. Whether they taste good or not remains to be seen. I was introduced to sautéed Brussels sprouts a couple of years ago by my sister-in-law and have loved them every since. The dad goes one step further and adds bacon and melted cheese, which makes them pretty much irresistible. 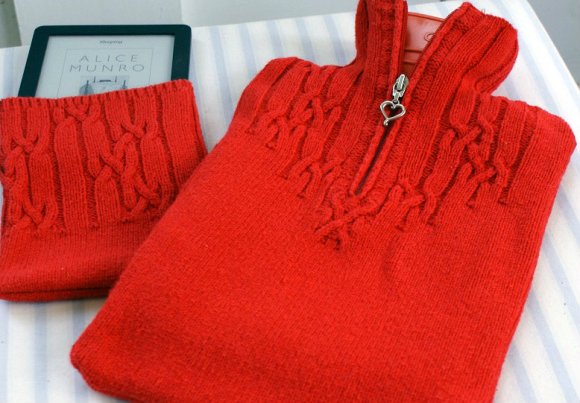 This could also go in the repurpose category, but I took a sweater that my mom gave me and made a cover for my hot water bottle and a cover for the Kobo so that it won’t get scratched as I carry it around in my purse. There is still enough left of the sweater that I might make a wine gift bag and a Christmas gift bag out of it.

I continue to love my Kobo and read almost every day at work on my lunch break. My only issue with it is the price of their books. I think digital books should be much less expensive – they have no overhead, paper or transportation costs associated with them, but I am paying only slightly less for a digital book than I would for a trade paperback or hardcover.  I have downloaded books from the library in the past for the iPod, so I will have to look into doing it again with the new e-reader.

The book club book choice last month was a bit of a bust, but this month’s book, The Light Between Oceans, is keeping me interested so far. I also read Runaway by Alice Munro after she won the Nobel Prize and I realized that I had never read any of her books.

The tall hormonal kid took centre stage this month when she was asked to be an MC for the opening ceremonies at her school. We were extremely proud of her poise and public speaking abilities (she didn’t get the love of public speaking from me).

The dad is involved in Ducks Unlimited with the planning committee for their annual local fundraising dinner and auction. He has also discovered the joys of volunteering to help run the Rotary bingo night. Bingo isn’t high on his list of fun activities, but he is still enjoying being involved and meeting more of the local business community.

The girls enjoyed their trick or treating the other night (and I have been enjoying the fruits of their labour). The tall kid enjoyed a month long winning streak of shut-out games with her hockey team (it ended on November 1st, but it was a great way to start the season).